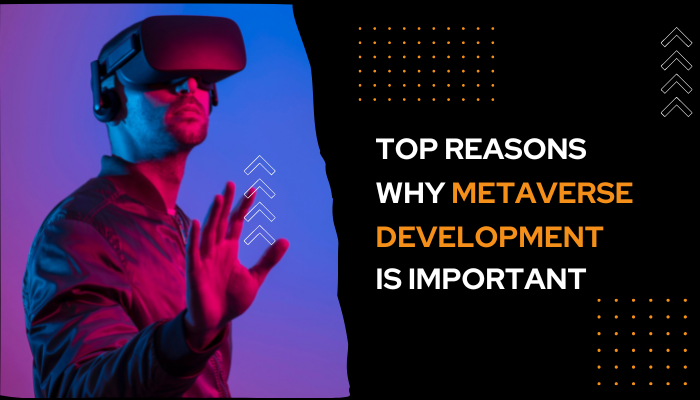 There are many reasons why metaverse development is important for the future of the virtual world. These include open-source development, the Native economy, accessibility for people with disabilities, and scientific research.

These reasons are just a few of the many benefits of creating an interactive world in the virtual world.

One of the biggest problems with Unity is the lack of user accounts or ancillary services. It is very difficult to create a direct-to-consumer experience with Unity. The game engine is unable to handle many ancillary services such as player accounts, a store, and game analytics. The result is that Unity games are typically simple mobile games. As such, these games are unlikely to serve as a gateway to the Metaverse.

If you look at image file formats, you’ll see that there’s a huge number of different formats. While most of the web today uses open standards to create content, much of it is proprietary. There’s a reason why Ford’s wheels don’t fit in GM’s chassis: the companies are reluctant to share data or integrate systems.

One of the main reasons that open-source development is important for Metaverse development is that it enables developers to create a free, open environment without restrictions. Unity’s Tony Parisi says that Metaverse should be an open-source project so that no one can control its creation.

The future of the native economy and Metaverse development are largely unknown. In a recent study conducted by Accenture, 4,600 executives from 35 countries were surveyed. According to the study, 71% of business leaders believe that the metaverse will have an impact on their organizations. However, the majority of them still don’t understand what it is or how it will work. Nevertheless, they do believe that this technology will change the way people live, work, and play.

Read More:   WHAT YOU CAN EXPECT FROM AN SEO COMPANY

In the next decade, the metaverse could create a US$30 trillion market. However, this massive development would also have a major environmental impact. It would lead to power-hungry data centres, with millions of servers and advanced graphic processing units. This technology would also allow for a new generation of cloud and end-user streaming services, AI for personalized environments, and scalable spatial computing. Blockchain-based smart contracts would also drive the growth of the metaverse economy.

Although this new form of currency can be controversial, the math behind it is simple. The European Union will be funding projects that explore the metaverse. To qualify, applicants must submit a project plan. Moreover, they must have at least 25% female representation.

Accessibility for people with disabilities

Accessibility for people with disabilities should be a top priority for Metaverse developers. Incorporating robust accessibility into the Metaverse’s design will create a more inclusive space for everyone. By learning from grassroots innovations, designers can implement strategies to improve accessibility. It’s important that people with disabilities have equal access to all kinds of digital spaces. With the right technology, developers can create a more inclusive Metaverse.

For example, augmented reality, which is an experience of a real environment enhanced with computer-generated information, could be beneficial to people with disabilities. Glenda Sims, a senior accessibility consultant at Deque Systems, explained that this type of technology may be used to create a more inclusive virtual world. She described the situation of a future traveler in an airport, whose experience could be enhanced through augmented reality.

The metaverse is a new virtual community that promises to connect people and devices. It is an emerging technology that has the potential to change social and economic relations. To make sure that it will be a success, policymakers must work with technology companies to write the rules of this new world. As one of the disruptive technologies of the Fourth Industrial Revolution, the metaverse is likely to transform our daily lives. The technology is still in its early stages, but policymakers need to be proactive in their responses.

The metaverse is a concept that combines the best aspects of virtual and real worlds. It is an interactive, 3D space where human beings can interact with each other and with other computers. The development of the metaverse will provide new avenues for social networking, commerce, and entertainment.

The most far-reaching vision for the metaverse is the development of brain-computer interfaces. Current XR models use traditional control systems and screens, and some use the sense of touch and smell to interact with virtual objects. Brain-computer interfaces can eliminate the need for physical hardware and screens. Neural interfaces, for example, are being developed to help people with speech impairments use computer programs in the metaverse.