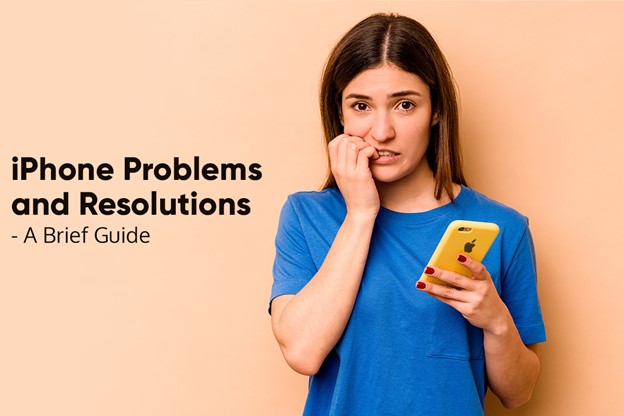 The first iPhone model was launched in September 2007, and since then, the popularity of Apple’s smartphones has skyrocketed all around the globe. As per reports by 9to5Mac, iPhone sales are still exhibiting an upward trend in the sales chart even when supply constraints have negatively impacted the sales of other smartphones. However, even though iPhones are exceptional devices that pack in top-notch power, they also exhibit certain issues from time to time, like other smartphones. This article will list some of the most common iPhone problems along with their resolutions. Let us get started:

Like all other smartphones, iPhones allow users to access the Internet using their SIM. However, there are instances when an iPhone cannot connect to the Internet using cellular data. For example, the sim carrier’s server may be down. In this case, all you can do is wait or try using another sim to connect to the Internet. However, if this is not the reason, you can try fixing the issues in numerous ways. For starters, you could try resetting your device’s network settings. Moreover, you could also try restoring the network by turning on the Airplane Mode of your iPhone and turning it off again.

Every year, Apple releases a major macOS update that features tons of new feature additions and revamped utilities. Moreover, the company also releases numerous patch updates throughout the year to resolve minor issues and optimize the device. Users who wish to use their iPhones to the best of their capabilities are advised to download and install the latest updates whenever possible. However, there are instances when iPhones are unable to download or install updates. There are numerous reasons why this happens. For instance, it may be due to a poor network connection or if there is not enough storage space left.

Thankfully, there are numerous ways following which users can resolve the issue. For starters, if you are facing issues when trying to install a new macOS update, check whether your iPhone model supports the new update or not. Besides this, ensure that your phone has at least 50% charge before you try to install the update. You can also try restarting your phone and checking the strength of the Internet connection. To know more, open https://setapp.com/how-to/fix-iphone-wont-update.

Users who have older iPhone models often experience crashing of apps and utilities. Moreover, there are instances when built-in applications stop working suddenly. Even though the issue does not come up frequently, it can be quite frustrating when it happens. However, there are numerous potential solutions users can try out if the issue arises. For starters, users can check if there are new updates available for the application. If yes, they should install them since doing so may resolve the issue. However, if the issue persists, it may be because of an internal bug. In this case, the best thing to do would be to submit a report to the app developer by stating the issues.

iPhones are known for offering exceptional battery life to users. However, over time, the battery life of iPhone models declines and thus, the charge drains pretty quickly. There are numerous tricks following which users can prevent their iPhone’s charge from depleting rapidly. For starters, they could identify resource-hogging apps and processes and terminate them. Moreover, they could also try using the Power Saver mode to ensure their battery lasts longer. However, if nothing works, it may be time for them to get their Apple smartphone’s battery replaced with a new one.

Another common issue iPhone users face is the battery not getting charged when the charger is plugged in. This issue can be irritating, especially if you need to use your iPhone for something urgent. However, there are numerous possible solutions individuals can try to resolve the issue. For starters, they can clean their iPhone’s charging port by removing the dust and debris inside it. Besides this, users can also check their device’s charging cable to see if it is causing the issue. If nothing works, it would be best to get both your iPhone and its charger checked at a nearby authorized service center.

When it comes to display, only a handful of smartphones even come close to the display of iPhone models. iPhones feature exceptional display panels in terms of clarity, brightness, and vividness. However, the screen may become unresponsive due to various issues. If it happens, one of the most effective ways to resolve the issue is to restart your phone. If this does not work, try charging your phone, as a dead battery may have resulted in the blackout. However, if the issue persists, check whether the screen has been damaged. If yes, get the display panel replaced.

Read More:   How To Get Unbanned From Bloxburg

If you are facing any of the aforementioned issues, try solving them using the listed solutions.

WHAT YOU CAN EXPECT FROM AN SEO COMPANY

Best Way to Move Files From One Google Drive to Another