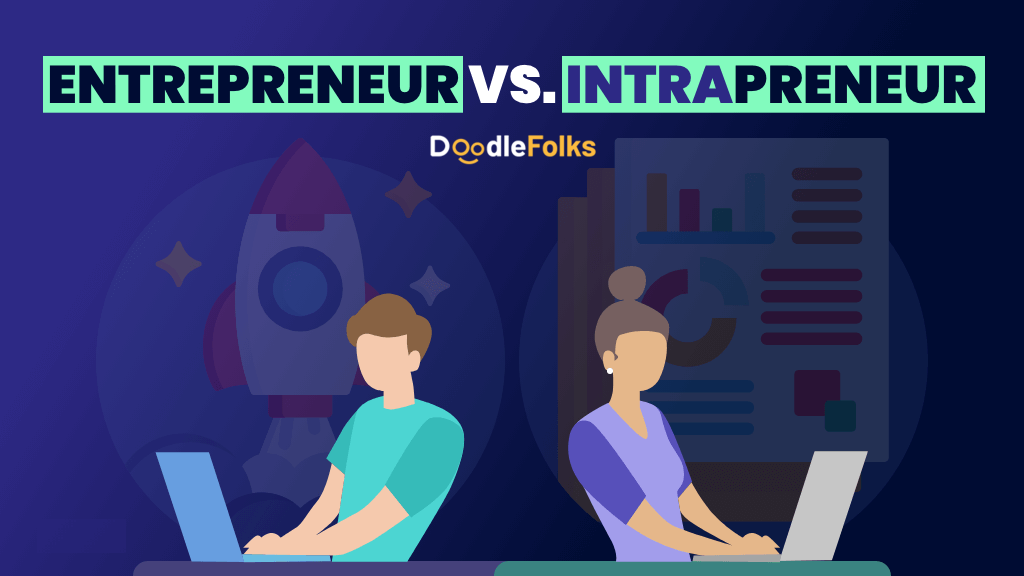 Intrapreneur vs. Entrepreneur – Here Is a Thorough Comparison

Apart from the scale of the innovation part, both roles have similarities like enthusiasm, creativity, and problem-solving skills. Such skills are necessary too as there are no helplines like Spectrum cell phone service helpline or support from some other company to answer your questions. Therefore, often the roles of intrapreneur and entrepreneur are fulfilled by people with such mindsets.

Here is a thorough comparison of intrapreneur and entrepreneur with examples in the following:

As mentioned earlier, a successful entrepreneur and intrapreneur share a similar set of skills. Both roles believe in their ideas and have the ability to effectively communicate them where it matters. However, the roadblocks and the types of friction they have to face have many differences.

An entrepreneur has to face opposition from the target industry. Connecting to the right investors, negotiations, and putting forward your idea to the masses are some of the challenges of an entrepreneur. Overcoming them is important for entrepreneurial success.

In the case of intrapreneurs, the roadblocks in putting forward an innovation are from within their organization. They may have to convince managers and higher-ups to give their idea a chance. Many organizations support innovations and ideas and others don’t. So, how challenging it can be for an individual depends on the culture and environment of a company. But one thing is for sure, both roles have their own sets of challenges.

Another aspect where you can compare the prospect of becoming an intrapreneur or an entrepreneur is by comparing rewards. Let’s first consider an entrepreneur who takes up challenges successfully and runs a business. The rewards for the efforts of such an individual are massive. For instance, the owners of Snapchat Evan Spiegel and Bobby Murphy became billionaires in their mid-twenties. Even if your business does not get success on that scale, successful entrepreneurship is generally more rewarding.

Comparatively, the rewards for an intrapreneur are not of the same volume. Again, it is because the innovations they bring with them are acknowledged within the organizations. Therefore, the rewards in their case may be a bonus, a raise in salary, or a promotion. However, intrapreneurs are usually the ones who get the top positions within organizations.

Risks and security are the main aspects where there are major differences between an intrapreneur and an entrepreneur. Therefore, it is important to keep these in account before making any final statement on what’s better.

Entrepreneurship is far riskier. As an entrepreneur, the magnitude of your decisions affects everyone in your company and especially you. You are responsible for making decisions for the whole company. As mentioned in the rewards section, an entrepreneur gets the most reward if a venture is successful. But on the contrary, the same entrepreneur is at the most risk and least security. Entrepreneurs are responsible for answering investors and stakeholders. Further, their personal and company resources are at a bigger risk. In other words. entrepreneurship does not always guarantee security as a lot depends on you.

Read More:   How Much Does Spotify Pays Per Stream?

Comparatively, intrapreneurship has a lot less risk involved for an individual. Developed companies that hire intrapreneurs take calculated risks and have the ability to cover if something goes off. Innovations are often applied after discussion with the team. So, the risk does not fall on just one individual but is divided. Also, since companies are usually asking for innovations, the position of an individual is usually secure. In other words, the blame for failure does not fall on one individual. So, it is a safer path.

Examples of Entrepreneurship and Intrapreneurship

Here are a few examples of entrepreneurship and intrapreneurship:

Evan Spiegel and Bobby Murphy are the innovators who brought Snapchat. The signature features on Snapchat like the stories option may have come out because of the innovations of their in-house team.

So, this is how an entrepreneur and an intrapreneur are different from each other and have their areas of focus.

There Are The Best Vaughan Electrical?

Beauty Salon Cleaning: How to do it and Why