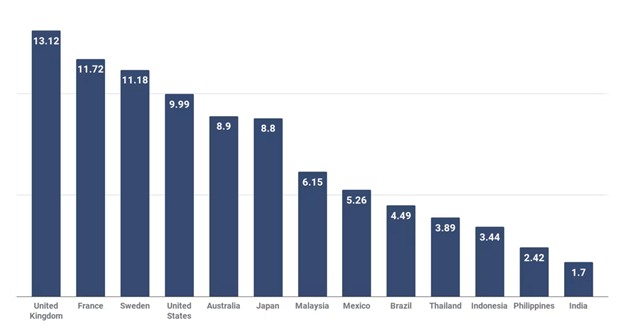 How Much Does Spotify Pays Per Stream?

There is a fascination among us about the payout system of Spotify. You want to know how much Spotify pays artists and how making money as a music maker can make money as a music artist is no easy feat.

But in today’s age of technology, there are multiple ways to make money with their music.

Now, as of right now, if you look at Spotify pays about 0.004 cents which isn’t a ton of money, but there are a ton of other streaming platforms.

You can release the music that pays you more or less per stream. And over time, all these add up.

How much money can an artist make from streams?

You can go into stores and see how many streams you had per platform and how much they paid. For example, Spotify had about 13,000 streams which were about 24 pounds. When you convert 46 pounds to American dollars, it’s about $62, which is not a lot of money.

Many viewers reinvest this money into advertisements; when you look at stores, you can see all these different platforms, and it takes about three months for each store to report back to ditto on how many streams they’re worth.

It will calculate how much money you have made. You can see tickets as a lot of strange but don’t pay anything at all you also can break it down by songs.

So even though some platforms are not very much, it just shows that even the songs you forget about can earn you money over your lifetime, and this doesn’t include all the other royalties you can get as a musical artist.

They’re also an even quicker way to make money from your songs; e’s a website called core right, and the website allows you to release your music through their platform.

How are royalties helpful for Spotify’s payout?

Suppose people can invest their money upfront for royalties later down the road in your music. If you look at other artists and what they’re making, some are making upwards of 13 grand a song.

It depends on how popular you are and how much royalty you want to give up per song, but this is a great way to raise money, which you can put towards advertising content creation.

Another way you should collect royalties for your music is through rights organizations; these are organizations such as BMI. When you register your songs with these organizations, they collect royalties for your performing rights which could be you performing live or your music playing on the radio. Then, after all that, you still need to sign up for the sound exchange, another PRO that collects royalties on non-interactive streaming platforms like Pandora. And then, after that, you’re still not done; after all that, you still need to register your music with song trust, and song trust goes out and collects mechanical royalties, which only covers streaming.

It doesn’t discuss you can license your music into movies and TV shows and make much more money.

How does your plan affect your payout?

There are a lot of different ways to make money from music. Now, as for the hundred dollars from co-writing and the $60 from all the streaming platforms.

So, this depends on what plan the subscribers are on; whether they’re on a free plan, a student plan, or a premium plan varies what the artist is going to get paid out. An artist gets paid about 0.004 cents per play in research. Now what this equal to rough students are some more average numbers for an artist to make $2,000 off of saving one song at that stream rate.

They would need roughly 450,000 streams on that one sock. The 0.004 cents are the artist’s payout of what that song produces.

How is the earning from a song determined?

So, what a song produces is determined by stream share. Once that revenue is generated, it is split in three ways: it goes to the artists, the publisher, and the writers, and then to Spotify itself.

And firm musicians on Spotify, this information is made public in the way of play counts because musicians are paid by how many plays or streams they get on the platform and because Spotify has a beautiful public API to scrape data from; you may be thinking great like and go to their API and get the play counts directly from Spotify well not so fast when you look at the documentation there you’ll see that the API will return certain things like, how many followers are particular artists have. They also offer a popularity score for every artist, which corresponds to a vague notion of how popular the artist is based on the popularity of all of their tracks, so when we look at the ways.

API section for the Blake count, we won’t find it also. Still, we will see that popularity count, and we look at it closer, it tells us that popularity is a derivative of how many plays each track has, and they wait for more recent sports more heavily than older ones.

There is no such hard and fast rule for the paying scale of Spotify Per stream or play on the music; instead, it is determined by the paying criteria of your residential country and your plan. Inspired by all these things, one thing that cannot be declined is to start the more streams and plays you have on your music video; then, there are more chances that you will grow at a good base and eventually will be able to earn a good amount from your music via Spotify.