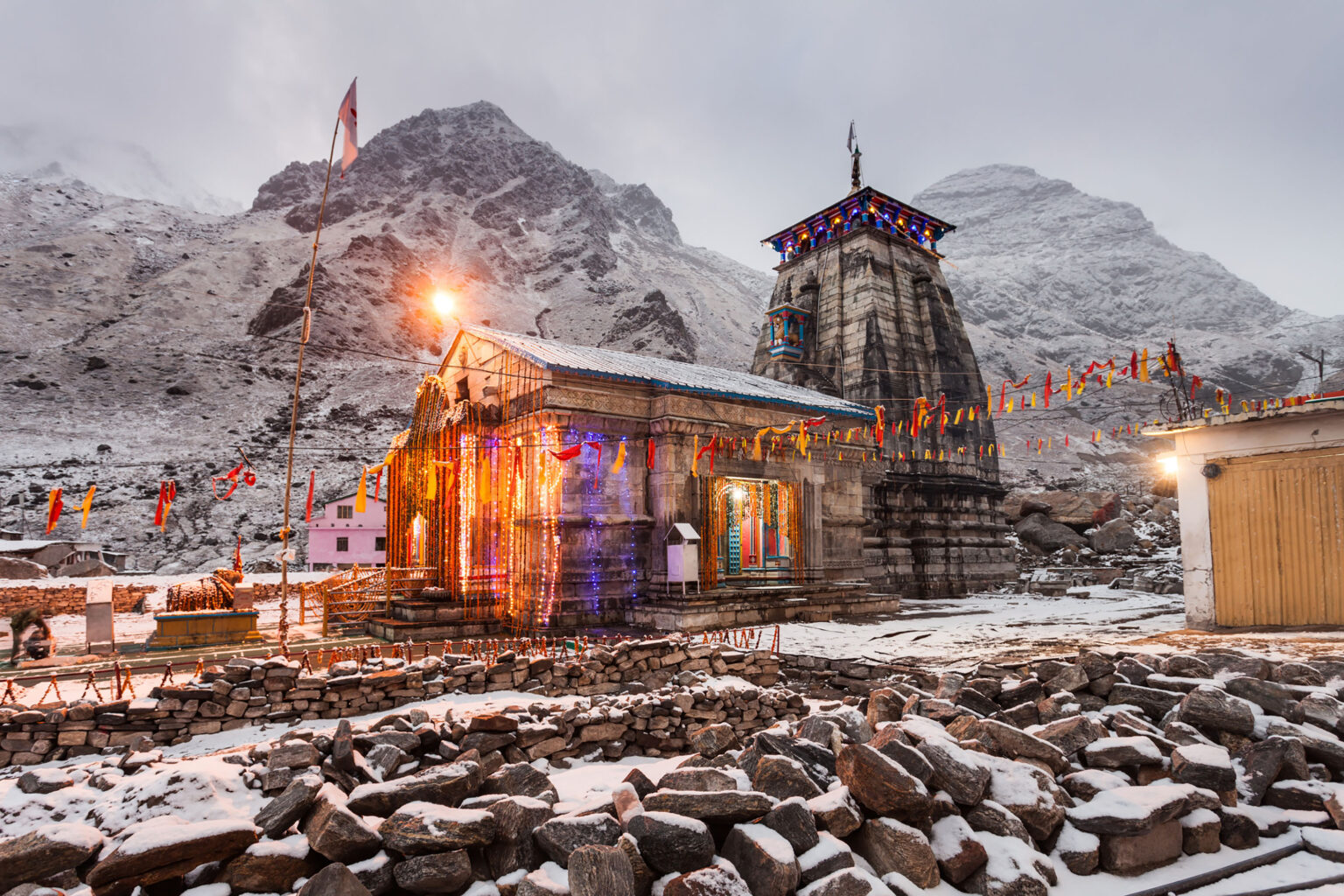 Kedarnath Temple at night, it is a hindu temple dedicated to Shiva, India.
Travel

Kedarnath is a heavenly Hindu settlement situated in Rudraprayag area of Uttarakhand. It is one of the Char Dhams found in the Himalayas, and is situated at an incredible height of 3584 metres above sea level near the head of Mandakini River.

The Kedarnath temple is amidst the picturesque snow-capped Garhwal Himalayan mountains and is thronged by millions of tourists and pilgrims each year. Also, the Kedarnath hike is strikingly gorgeous and highly eclectic, even in the trekking circuit.

Famous for the old shrine devoted to Lord Shiva, it offers a tranquil ambiance with a beautifully painted backdrop thanks to the rhododendron forests, snow-covered mountains, and spectacular vistas of nature. An blend of devoutness and adventure is what makes it incomparable. A MUST VISIT for one and all.

Kedarnath literally means the Lord of the field, and it is so called because the “crop of liberation” grows here. While it is not established who created the temple or when! One of the oldest references of Kedarnath is in the 7th or 8th century. It is also believed that Adi Shankara died near the sanctuary.

It is believed that post the battle of Kurukshetra, Pandavas went on a voyage to Banaras in order to regret killing their own and seek blessings from the Lord. But, Shivji wished to avoid meeting with the brothers, and thus, took shelter in Guptakashi.

Read More:   How Can A Luxury Party Bus Temecula Be Useful For Your Event?

So He made the choice to hide underground and adopt the same strategy of anonymity. But Bhma, his brother, did everything he could to keep the bull from departing, clinging to its legs and tail. Regrettably, the Lord dove and vanished there, leaving behind his hump, which is venerated in the Kedarnath Temple.

However, it is thought that the Pandavas were absolved of their crimes through cosmic energy, and Shivji revealed that He will henceforth be present in Jyotirlinga form at Kedarnath.

Kedarnath, in the Rudraprayag area, is the farthest away of all the Chota Char Dham destinations. Kedarnath is surrounded by snow-capped peaks, the most notable of which are the Kedarnath mountain (6,940 mts) and the Kedar Dome, and is located near the Chorabari Glacier, the source of the Mandakini river (6,831 mts). The settlement was established on an uninhabited strip of land along the river’s bank 223 kilometres from Rishikesh.

In 2013, flash floods triggered by excessive rains in Uttarakhand caused major damage to the town. It’s amazing that the temple held up so well through all those disasters.

It is typical of the Himalayas, with mild summers and brutally cold, snowy winters. Sightseeing, temple visits, and exploring local sights are best during the warm summer months. In the summer, temperatures often hover around 17 degrees.

The monsoon season is rough, and the region frequently experiences heavy rainfall, especially in 2013. The average temperature during a monsoon is roughly 12 degrees. The winters are difficult, chilly, and uninhabitable. From November till April, the palki of Lord Kedarnath is taken to its winter home near Guptakashi – Ukhimath. The season’s always bad for the weather.

Read More:   Top Tourist Attractions To Visit In My Tho

When to Go to Kedarnath

From early April until the monsoons arrive, then again from the end of the rainy season to the beginning of the dry one. May, June, September, and October are ideal times to visit Kedarnath because of the pleasant weather despite the cold weather that prevails for rest of the year.

To comply with government regulations in Uttarakhand, all visitors must first complete a biometric registration. Access to the centre is also provided over the web. One other option is to go to Sonprayag and do the same rituals.

If you need help with your travels, hiring mules or porters is a breeze. Check the advertised pricing before making a purchase to ensure you aren’t being charged more than necessary.

Make sure to verify the identity of any prospective porters or mule owners before hiring them.

It is best to stay low to the ground during the monsoons. Especially considering the devastation that Kedarnath suffered in 2013.

Do check in with the proper authorities and government agencies if you insist on going there during the rainy season.

No photos or videos may be taken within the temple. Keep this in mind, and don’t forget to follow the temple’s regulations.

Getting to Kedarnath: Some Suggestions

If you can, try to get an early start on your hike so you can avoid the heat of the afternoon sun.

It’s important to start the day off right with a healthy (but not too hefty) breakfast.

Read More:   What is the perfect time to book flights to Chicago?

Keep yourself well-hydrated by consuming plenty of water. Be sure to bring your own water bottles, though.

Ten Ways to Heat the Heat on Vacation

Tips to have the Right Choices in Umrah deals

Becoming A Chauffeur: What You Need To Become A Hired Driver